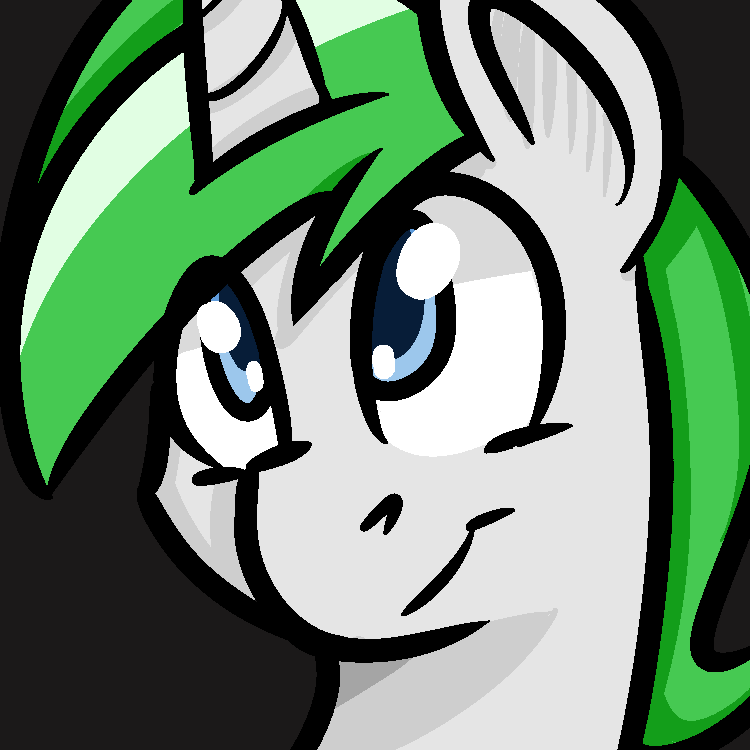 A blog that might be sporadic and just a touch unpredictable.

It has been three quarters of a year now since I put this project to rest. The convention has been and gone for the last time, and has had some teary farewells.

The website for MWBF 2015 was built in WordPress, and when I was asked to get involved in 2016, I set to change that.

When I started on the new project, out went the old dark design and tiny text, and in came bright and vibrant colours and much larger fonts that made the website easier to read.

It annoyed me to put "May 27" rather than "27th of May", given that I'm British. I put my tea-drinking British-isms to one side, though, and continued towards making a website that Midwest Brony Fest would be proud to use.

...says the commit message in the repository. Thus, our homepage went live. 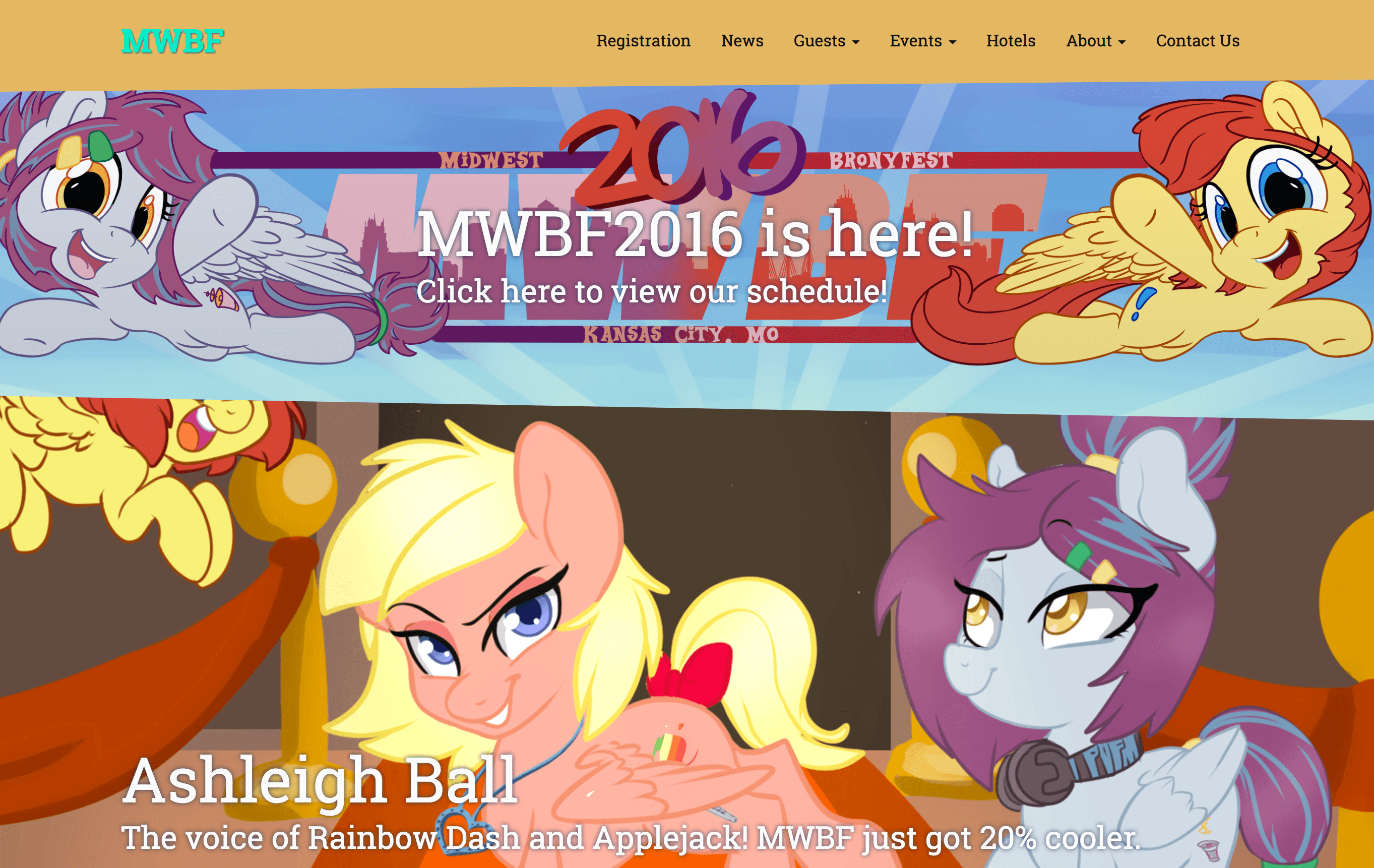 The homepage feature changed each time there was a new guest announcement, which was about every one to two weeks. 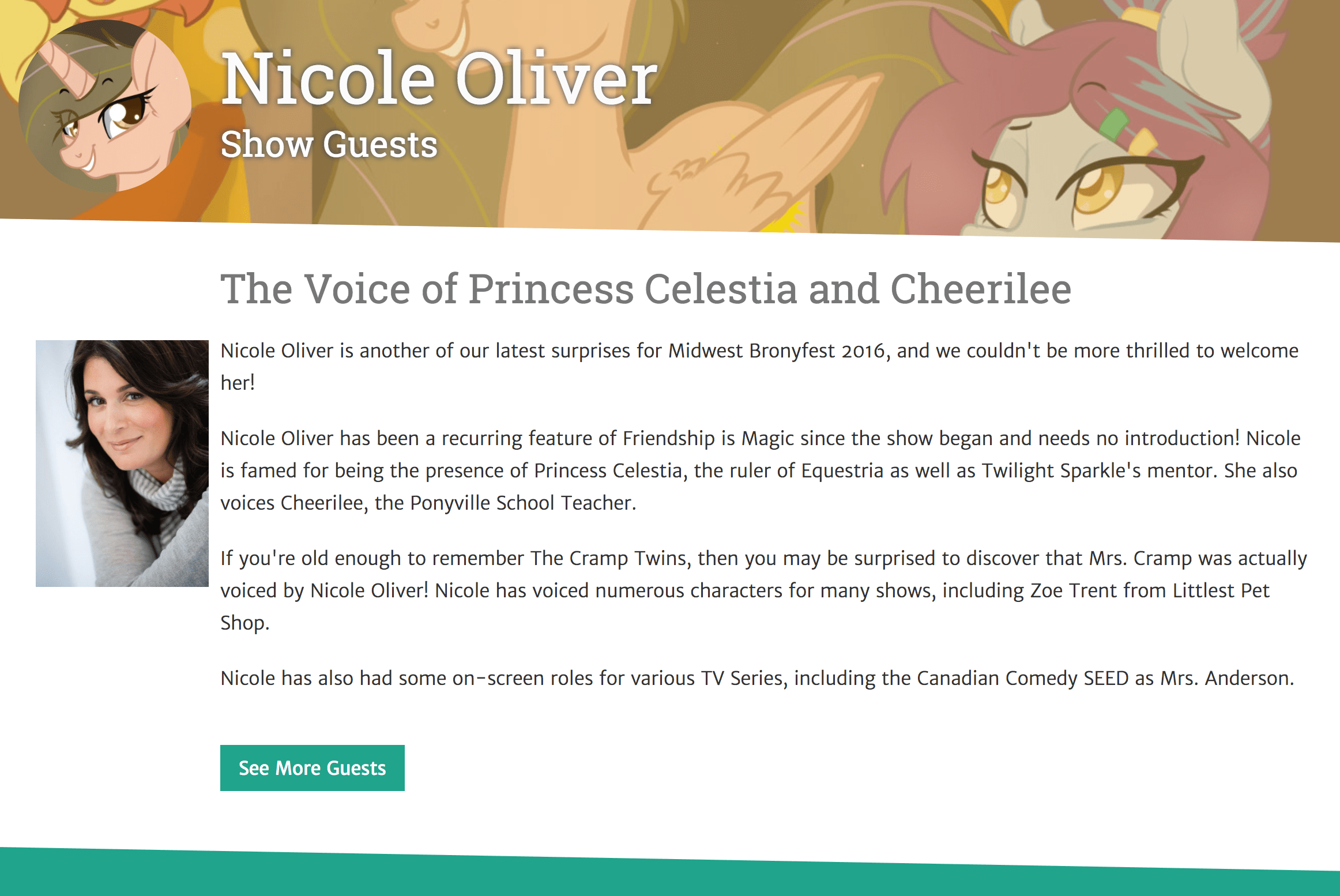 Each guest had their own page, which was beneficial for discovery by search engines and meant that if a potential visitor was looking for the names of voice actors or performers, that the convention would be discovered by them. 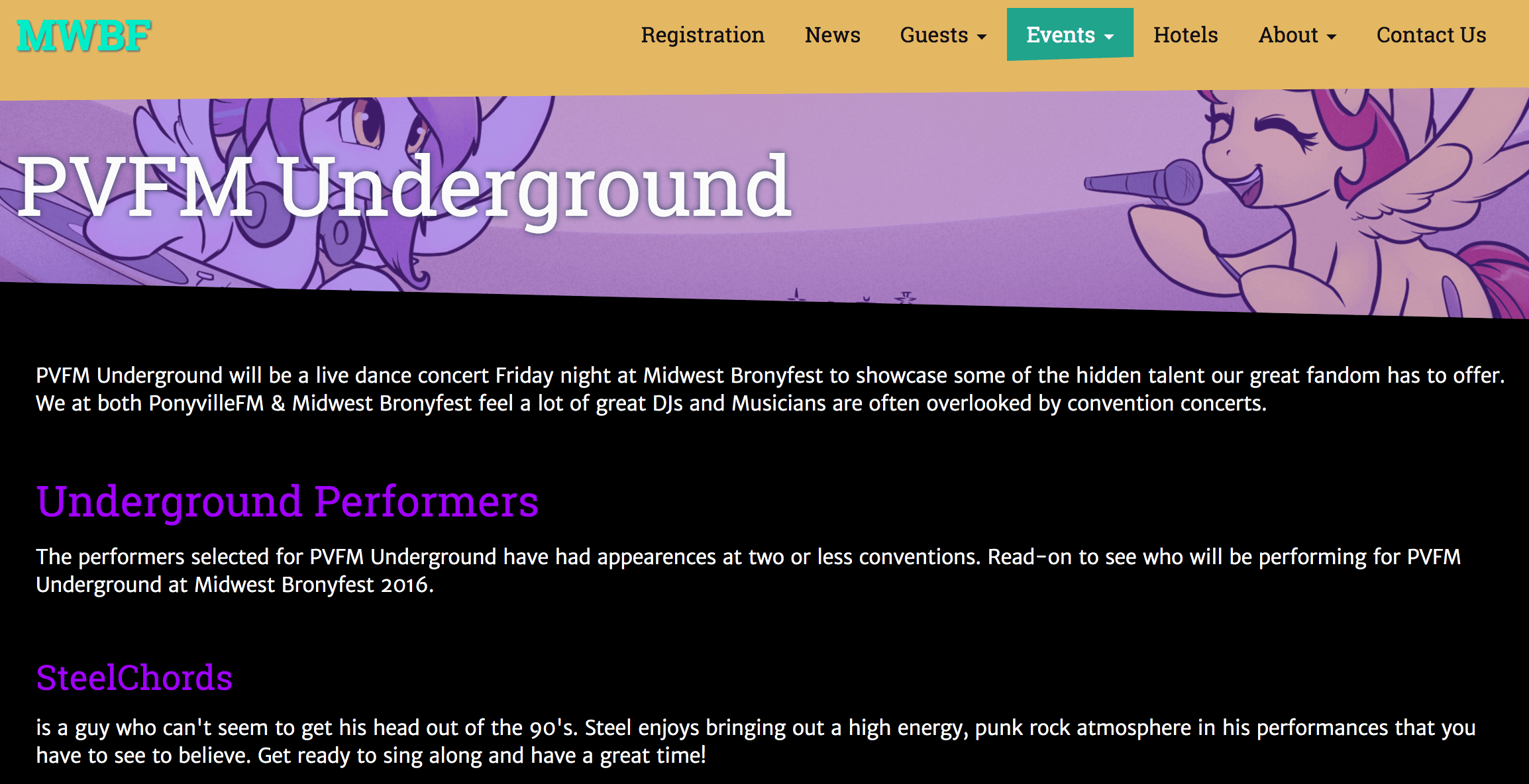 There were several large features planned through the convention that were events in their own right - notably there was a Concert called "LOUDER" and a newcomers' stage called "PVFM Underground". The pages featuring these events used a distinct white-on-black theme to differentiate them from the rest of the website. 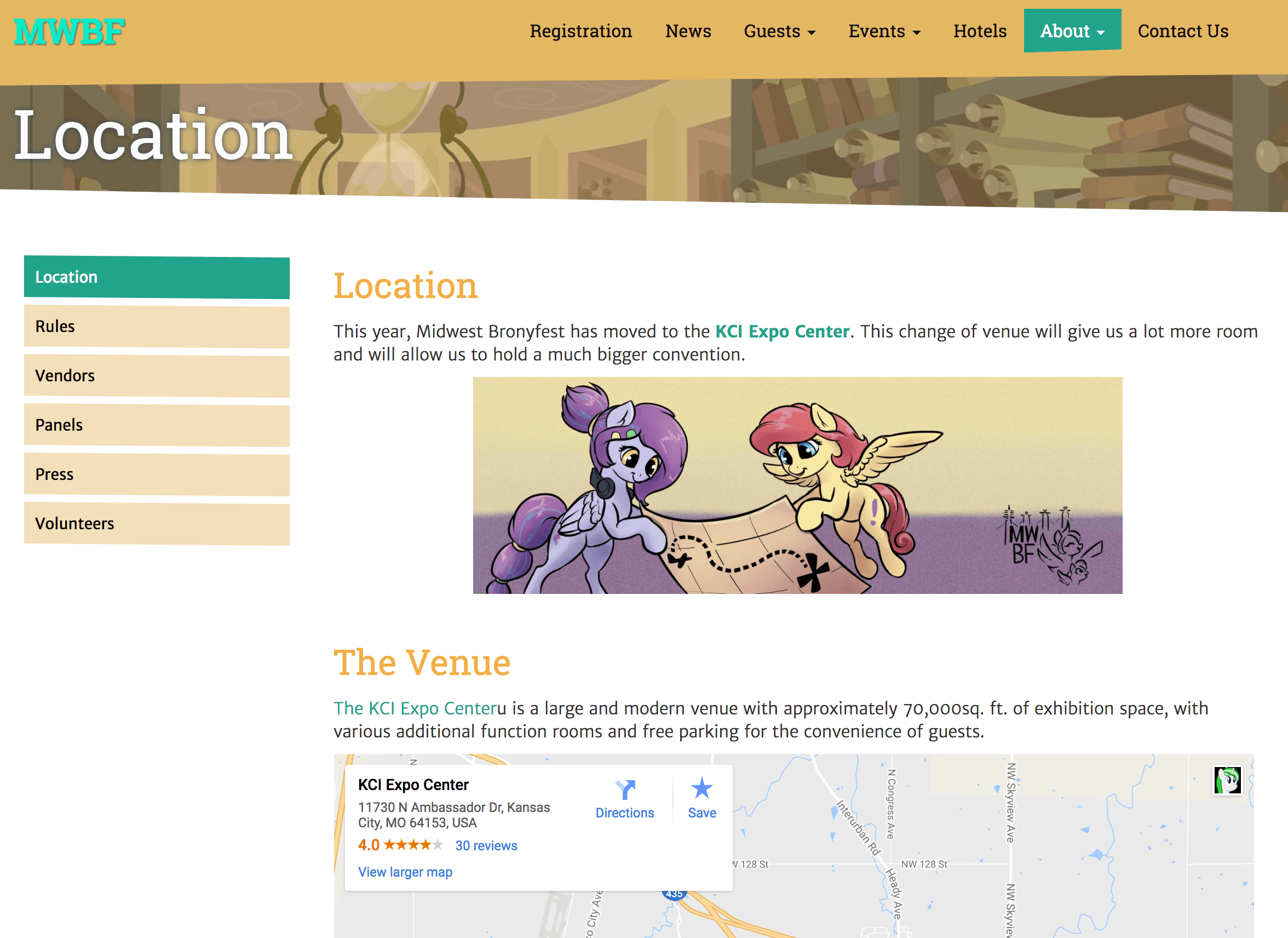 For generic content that didn't warrant its own link in the navbar, there was a "sections" page design that grouped related content together and introduced a side navigation menu.

All in all, I genuinely enjoyed working on the Midwest Brony Fest website project, and was very grateful to have receive positive feedback from the convention-goers about the website design and ease of use.

To everyone who worked on making the convention a reality: Thanks!

If you've been any of the websites I work on, you might have seen one of my footers appearing to criticise WordPress. So, you might be asking yourself something along the lines of...

"Hey! Why is this guy bashing on WordPress? WordPress is great, isn't it?"

If you're setting up a website, where the sole purpose is to be a blog, then I would be inclined to agree with you. Unfortunately, a lot of people wrongly assume that WordPress is a "CMS". Which it isn't.

As a website developer (website, not blog), you want a suite of tools that allows you to create content to form a fast and effective website. WordPress was built to be a blogging platform, not a CMS (Content Management System). So, the Page and Content Management tools that people use in WordPress came as an after-thought.

"You're still talking rubbish! It's great because it has good SEO!"

Only if you use a handful of third-party plugins - by default, the only thing of any use that WordPress has is "friendly URLs", which only do so much for your search ranking. You'll have much more success doing things like ensuring correct usage of meta-data, breadcrumbs (so Google can understand the context of your pages) and appropriate use of keywords in website content (but not keyword abuse) to make sure your site comes up for the right keywords.

These are things that you can bake into any project you work on, whether it be Drupal, WordPress, Laravel, or something of your own concoction.

My complaint about WordPress at the end of the day, is that it was built for a purpose other than how it is used today. It was built not with developers or designers in mind, but for content editors - for bloggers. If you're a blogger, then by all means, use WordPress. If you're starting an e-commerce business, social community, or something else, then I would suggest you look at other alternatives first.

So, I don't normally have a topic worth discussing, but whilst this is still fresh in my mind, let me tell you a little story. It is a story about how an individual hosting company screwed up oh so royally. And at the time of this post, is still going on...

A bit of background

A few years ago, I discovered a VPS Host called BHost. They were a small UK-based VPS company that were offering decent-spec Virtual Private Servers for a very good price, and would occasionally offer recurring discounts too. To top that off, if you had a problem, you could send them a support request, and they'd reply within an hour. Even for things that they weren't obliged to help you our with (such as setting up a VPN with your VPS).

I had a pretty good relationship with them, and at one point, had three different VPS instances open with them at once. If you had outgrown your server and wanted to beef-up the memory, you could send a request to them and their response would be along the lines of.

No problem! We've upped your container for you. Don't worry about paying the difference - you'll pay the new tarrif next cycle.

That was my experience with them a few years ago, anyway. Then things started to change.

To start, BHost moved their hardware to a new datacentre, and not long after, they started suffering bandwidth and routing issues - the slightest DDoS on any of their clients and the entire cluster would be knocked offline. I should know, because one of my sites was the target of an attack and the hosts ended up tweeting about it. (That particular attacker was brought to justice and hopefully provided the authorities with intel on other, more serious criminals, but that's for another time...)

Whenever unexpected downtime occurred, we'd sometimes be left waiting for support tickets to be answered, or for information to appear on Twitter. After challenging their support about the matter, I was promised that improved measures would be put in place to deal with incidents and to relay information to customers.

Because of the patchy service and just as patchy support, I cancelled one of my instances, and then cancelled a second instance because it was going un-used.

Fast forward to a few days ago. One of my users informs me that services are down - did someone sit on something, did something crash, or did someone forget to pay the invoice again? Nope. We were out of space. Which was weird. Out of a quota of 50GB, we were only using 30GB. Why were we out of space? What many providers like to do is over-sell space, knowing that only a handful of users will consume 100% of their quota and that the rest of the clients will comfortably share the rest. What that means, though, is when the disk physically runs out of space, every single client on that machine goes down.

Most providers can avoid this by limiting how much they provision to a single disk (or machine), and to have monitoring and alerting systems in place for when a drive gets to 80% or 90% capacity. If such a system was in place, then this kind of situation could have been avoided in the first place.

So, no monitoring system was in place to prevent this disaster. Slow clap.

So, when (like me) you realise that this problem isn't your fault, you open a support ticket with a high priority and you ask them to investigate ASAP. They should figure out what's going on pretty quickly and get to the problem. Right? Especially when potentially dozens of other clients are having the same problem and have come to the same conclusion. We're renting Virtualised Linux Servers - we should individually have the computing smarts to understand what's going on.

The nail in the coffin

No. Checking Twitter, plenty of other people have fired-off support tickets, had no reply, and then chased them up on Twitter. The fire is continuing to burn, but the fire department is nowhere to be seen - you keep calling 911 and the phone keeps going to voicemail.

If you're like me, you had a contingency plan in place. Nightly automated backups. You built your log cabin on wheels and you can steer it away from the danger and into a safer neighbourhood, on the far side of the lake. If only the fire department had just put that fire out before the move was necessary.

If you're not like me and instead you're one of the unfortunate people on Twitter who didn't have backups (why didn't you?), then your log cabin has probably caught fire and the fire department are still not answering. I feel truly, truly sorry for you. If they turn up before you've lost your home and put the fire out, you've still suffered a great deal of damage.

If I were BHost Inc. right now, I'd feel pretty flipping ashamed. You just let your customers down, and you probably let their customers down too. If I were one of BHost's clients (keep in mind that I was one myself), I'd be livid (and I am) - the moment you get your services back online, I'd demand they waive any outstanding invoices, take some backups, and go somewhere else.

Can I escape too?

If you've got some MySQL Databases you're having trouble dumping, then I'd do some research into taking the .MYI files or .FRM and .IBD files used by MySQL, copying them to a new machine, and work on restoring your data from those - it isn't quite as straightforward as having an SQL dump, but it is very possible.

I wish you luck.

Well, it's the first time in a long time that I've done one of these. Long time = 7 years ago, so when I was still in school.

I probably still won't bother updating this very often, but at least now I have the option to do so, eh?

What is "Maisy's Musings"?

It's a blog. A blog that happens to be mine. The name Maisy is just a pet one, but because it sounded catchy, I decided to call it Maisy's Musings. When I can be bothered or inspired to write a post on here, you'll see things from daily sightings, to the occasional rant or cool tech fact.

Read-on at your own peril.